Posters and Propaganda in World War One

Plastered on every available surface, from factory walls to Nelson’s column, propaganda posters were more than a simple and effective way of conveying messages; they were a powerful tool deployed by the British government as the country plunged into total war.

They were used to create support, convince men to join the fight, suppress resistance, install a female workforce and cover up the bad news and horrors of war. From Kitchener’s pointing finger, to the depiction of German atrocities, Alex Sotheran takes a look at how the imagery, emotions and messaging behind the posters changed over the course of the war.

Posters in the early years

Kitchener’s pointing finger and ‘Britons Your Country Needs You’ slogan is surely the most iconic poster of the First World War. Drawn by Alfred Leetes and issued in 1914, it’s also one of the earliest.

And yet, it originally only appeared as a single page advert in the London Opinion of September 1914: a study by the Imperial War Museum found that this poster actually only became an influential image after the war and had very little impact between 1914 and 1918.

Other early propaganda posters of the First World War concentrated on German atrocities in Belgium and France. Some were imagined, but in many cases the German army were their own worst enemy in creating bad publicity.  The humanitarian aspect of the German invasion of Belgian, though it was not the reason the British government went to war, was what many of the early posters focused on, in the hope that it would create a need and support for the hostilities.

Posters and the progressing war

As the war progressed many things changed, not only in British society, but also within the army and propaganda also shifted in its emphasis. From 1915 the threat of the German army on Allied territory became a theme, along with the threat of German invasion of the UK, which was perceived as a very real threat by the government even until 1918.

By 1916 and 1917 the problems created by rising casualties and latterly war weariness were also tackled by propaganda posters. The emphasis changed to sacrifice and ‘lasting the fight’. Far more violent themes appeared on propaganda alongside the call for war bonds and other austerity measures.

Backing the soldiers and winning recruits were not the only targets of the posters; female members of the population were specifically addressed in propaganda.  In the early war, women were central to volunteering for the army with some unapologetic images which, though they would arguably have had a different resonance with Edwardians, would today would be seen as emotional blackmail,.

Similarly, as the hardships of the war increased, the images of women on propaganda posters also changed. The increase of a female driven workforce saw a shift in the way women were portrayed within the overall war effort. Factory work was put on a par with fighting on the front: to be kept onside, women needed to be portrayed as just as instrumental as men in the fight against Germany.

Plastered on every available surface, from factory walls to Nelson’s Column, propaganda posters were a ubiquitous part of everyday life. From asking men to do their bit on the front line to calling for a female centred workforce, propaganda posters played a major role in the Allied victory as a tool of total war. And it is perhaps this role that has meant they are still so recogniseable and iconic 100 years after their first printing. 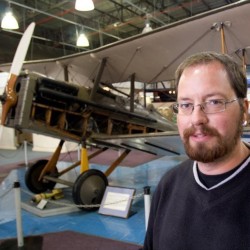 Alex Sotheran completed an MA at the University of Birmingham in British First World War Studies and has spent over ten years working on First World War sites in Britain, France and Belgium as a Battlefield Archaeologist for, No-Man’s-Land (the European Group for Great War Archaeology) and the Somme Association of Northern Ireland.