How To… Tell What Type of Pot You’ve Got – the Medieval Dig Edition!

From so-called ‘sparkly-ware’ to the early-modern equivalent of ‘ironic’ hipster crockery, here’s how to identify 12 types of pot you’d expect to turn up at a medieval dig.

Leiston Abbey is one of Suffolk’s most beautiful upstanding medieval ruins. Built in the 14th century, it was home to a group of Premonstratensian canons (or priests) – a little-known order who did more than the usual teaching and healing; they were also involved in heavy industries like metalworking, tile-making and even… forgery!

Over three seasons of excavation, our crew of Venturers have been trying to find out more about their lives at Leiston Abbey. Among the finds, there were plenty of bits of old pottery – mostly from the kitchen middens – and we sent them all off to Paul Blinkhorn (yes, him off of Time Team) for analysis. His preliminary conclusion? It’s all pretty much what you’d expect to find at a medieval abbey in Suffolk.

Well, it’s alright for a lifelong pottery expert with tonnes of experience to say that! But for us layfolk, we found the vast variety of vessels a lot more surprising. In fact, when you look closely, you can see how tastes in tableware changed over the life of the abbey, from locally-produced utilitarian pieces, to fancy, decorative and international wares, and back to a simple, but this time nationwide, designs.

Anyway, for those of us who could take a lesson from Paul, here are the basics of the main 12 wares the Leiston Abbey team found, and how to recognise them. And they’re all fascinating in their own way.

Hedingham potters, from north Essex, were famed for their 13th century jugs and flagons, which are found at sites all over East Anglia, and have been summed up as “the most distinctive fine ware in the area”. That sounds pretty posh, but were the priests really using the medieval equivalent of Wedgwood? By the 14th century, Hedingham kilns were also making coarser, less distinctive wares, which are more like what we found at Leiston Abbey.

What to look out for: orangey clay with a green glaze, but the main giveaway is lots of mica in the clay – nicknamed ‘sparkly ware’

Grimston potters, mostly based near King’s Lynn in Norfolk, made all sorts of vessels, but most famous are the increasingly ornate jugs decorated with amusing bearded faces. This style of pottery was extremely popular in medieval Britain, and was exported as far afield as Norway.

What to look out for: coarse, sandy dark bluish-grey clay, often with a dull green glaze and (if you’re lucky) a bearded face!

As the name suggests, this ware is made from white–firing clay, and comes from (you’ve guessed it) Surrey. They mostly made jugs, but even moneyboxes and urinals have been discovered. I’d love to say that the moneybox and urinal were an early form of paying to use the toilet alas they are not from the same site! Only one sherd was found, but there were plenty of other sizeable pieces of glazed, medieval earthenware to make up for it.

What to look out for: white clay, green glaze

Ah! Now things are going international and the pottery we find reflects a shift in where the abbey’s ceramics are coming from! Stoneware is basically an incredibly hard, non-porous ceramic usually fired at very high temperatures and the medieval equivalent of a Le Creuset set. These usually pale grey jugs and vases came all the way from Langerwehe in Germany, and are precursors to the later German Stoneware, which we’ll see some of later. Bits of it were found all over the site, but how did it get here? Well, the nearby port of Ipswich and other market ports and strong trade connections with Germany and the Low Countries.

What to look out for: grey or brownish ‘dirty looking’ clay that’s basically rock hard

Flemish ships were regularly calling at the Suffolk port of Colchester by the 1340s and, because there was so much pottery arriving from the Low Countries, it apparently became liable for taxation. By the 1500s, it was filling the gap left by a decline in trade with France (all that fighting had an impact on trade). These wares suggest Leiston Abbey’s occupants were relatively well off, trading with foreign merchants in a way that wouldn’t have happened for the small towns and villages surrounding it.

What to look out for: reddish clay with a metallic looking orange glaze

By now, drinking jugs were regularly being imported and these ones are pretty similar to Langerwehe Stoneware, but produced on the Belgian-German border, and finished with an orangey gloss. It was one of the most common sets of sherds we found on site. This ware was available just before the Dissolution showing the monastery was still buying goods that came in through the international ports dotted around the Suffolk coastline at this time.

What to look out for: hard grey clay, slightly metallic brown and/or grey surface

One of our favourite finds was this charming oak leaf – a tiny fragment of a typical German Stoneware jug, which were largely produced in Frechen and Cologne. They must have been pretty popular, because variations on this theme were used by German Stoneware potters for over 200 years.

What to look out for: Grey clay with a mottled brown glaze gives this ware its characteristic ‘tiger’ look.

As the medieval moved into the post-medieval, pottery became much plainer. These locally produced Suffolk redwares were some of the most abundant on site and found in almost every trench. Somewhere between the highly decorated vessels of the medieval period, and the plainer wares that came later, they produced a much wider range of forms than had previously been manufactured by rural potteries.

What to look out for: pale redware (usually buff to orange) with partial green glaze

Another ware from the abbey’s post-dissolution life as a working farm. Midland Blackware is a coarse, earthenware (the least compacted pottery type) produced in and around Staffordshire. The addition of iron to the glaze is what gives it a strong black colour. Typically they’re simple tygs (tall drinking vessels) but they also produced some pretty ornate pieces.

What to look out for: Fine, sandy earthenware with a black, iron-rich glaze

This ‘country pottery’ came in a range of utilitarian forms, from jugs, to watering cans and drinking vessels but was widely used for other crockery items. We’re getting a bit of a hipster vibe here in the popularity of these rustic forms.

What to look out for: fine, reddish-orange earthenware painted with a plain orange or green glaze on the inside, or sometimes on both surfaces

As you can guess from the name this came from Staffordshire. Its white/buff fabric with yellow glaze and brown-combed slip makes it look a bit like a bakewell tart. It turns up all over the country, mainly thanks to the canal network used to transport goods. Productions vary from press-moulded plates to teapots to moneyboxes.

What to look out for: white or yellow slip, glaze and lots of decoration

First produced in Woolwich Ferry, London, this ware quickly spread all over England with an explosion of pottery companies that continued for the next two centuries. It was initially mainly used for mugs and tankards, and then later used for ink bottles and beer jars.

What to look out for: Very hard grey ceramic, usually coloured white or sometimes brown

All in all, the abbey was certainly popular and the wealth it had attracted many traders during its life. A lot of the earlier wares were bought in locally or imported from foreign merchants. Improvements in transport and production, especially in Staffordshire, saw later post-Dissolution pottery that was found at the abbey, dotted all over the country.

And now you know exactly what kind of pottery a pottery expert would expect to find at a medieval abbey, maybe this season you can come and help us find something a little more unexpected…

H/T Paul Blinkhorn – we couldn’t have done it without you! 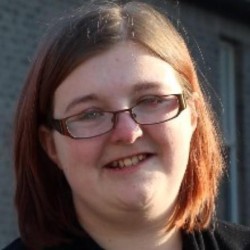