Decorating eggs is a well-known Easter tradition in many parts of the world, but it’s actually a practice that goes waaaay back in time. Like 60,000 years back in time.

If you’re looking for a bit of inspiration this Easter, then here’s our handpicked selection of decorated eggs from the ancient world that you can try at home.

These are just some of the 270 fragments of engraved ostrich egg that archaeologists have collected from years of excavation at the Diepkloof Rock Shelter in South Africa, and which were used to create this replica. The site is about 60,000 years old and the eggs were probably used for storing water.

This egg from Ur, Iraq

This ostrich egg comes from a grave in the Royal Cemetery at Ur, in modern-day Iraq. While ostrich eggs were used as containers in north Africa as early as the fourth millennium BC, the earliest eggs found so far in this part of the world date to about 2600-2400 BC.

This ostrich egg from Egypt dates to about 2,000 BC. There’s plenty of evidence that not only the Egyptians, but also the Persians, Greeks and Romans also decorated eggs which they gave as gifts, given to the gods, or even just eaten during ancient spring festivals, like the Egyptian Sham el Nessim (still celebrated today), the Greek Anthesteria, and the Roman Lupercalia.

Like the Ancient Egyptians, Greeks and others also placed decorated ostrich eggs or their representations in gold, silver or clay in graves. But these ones mimic the typical blackfigure ceramic vases. Currently on display at the Kerameikos Archaeological Museum in Athens and dating to the early 5th century BC. These were definitely the least rude ones we could find!

Looking lovely in red and white is this fleur-de-lis. It comes from Puig de Molins in Ibiza – a 3,000 year old Punic-Phoenician necropolis. Don’t crack this one open – we’re pretty sure you won’t get a nice surprise if you do!

This egg from the Isis Tomb, Italy

Is that a unicorn? Or a horse with one very big ear? Whatever that beautiful beast on the right is, this egg also features four sphinxes. Originally, it would have had a mouthpiece and support to form a drinking vessel. It’s another Phoenician design dating to about 625BC-600BC.

This Iron Age egg from the Villaricos necropolis, Spain

This iron age egg from Spain dates to around 300 BC. Don’t go hiding it now will you? We’re not sure museum curators are as much fun in that respect as the Easter bunny.

From around 700 BC, this Cypriot egg lives at the archaeological museum in Tarquinia. Got to love the merry little people holding hands and the big and small figures below… looks like this one was decorated with some sort of party scene!

So of all things, why decorate eggs? And why during springtime? Well, the eggshell does provide a good surface for decoration because of its smooth firmness and light colour.

The egg is and has also been considered a symbol of new life, fertility, and rebirth, and also plays a main role in many creation myths, being the beginning of the universe or with the first being or deity hatching from the egg.

In any case, egg decoration is a fun tradition which can be enjoyed by all ages. and cultures today. We hope these examples give you some ancient inspiration! 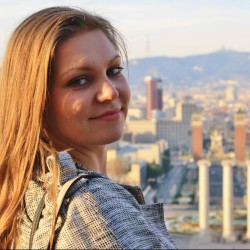 Maria loves all things archaeological. Having graduated with an MA in public archaeology, dug a Roman site in Macedonia, fundraised for the historic building of Lauderdale House and excited visitors at the Hands-On Desk at the British Museum, Maria’s true passion is bringing archaeology to the people – in one way or another. Twitter: @mariapakholok

Learn the basics of skull anatomy, and some of the key features archaeologists look at.