BBC Four has delivered a treat with the first episode of its comedy about metal detecting that has left us chomping at the bit to watch more!

When it was announced that Mackenzie Crook (of The Office and Pirates of the Caribbean fame) was writing, directing and starring in a comedy series about metal detecting, the general reaction on social media seemed to be that of bemusement and wariness. Some people worried that the show would glorify treasure hunting, whilst others, including the National Council for Metal Detecting feared that it might trivialise metal detecting. Indeed the NCMD even refused to cooperate with the BBC when it was approached to participate in the development of the series, for fear that it would “belittle detecting”.

Detectorists, however, does nothing of the sort. The first episode, which aired on BBC Four last week, was a joy to watch. Fantastically written with well cast and performed characters, it arguably showed metal detectorists in a sympathetic light.

The programme follows Andy, a cleaner studying a part-time archaeology degree (Crook) and his detecting buddy Lance, a lonely, divorcee who sells everything that he finds, including ring pulls, on ebay, because “people buy this shit” (played by the amazing-in-everything-he-does Toby Jones).

Viewers are introduced to the realities of metal detecting, where detectorists may hope to discover something on the scale of an Anglo Saxon burial, but in reality mostly what they find are ring pulls and biscuit packets. The camera follows Lance and Andy as they spend their weekends detecting together, finding very little, forgetting to spend time with their families and attending meetings at the Danebury Metal Detecting Club listening to sleep-inducing talks on buttons by the club president.

Towards the end of the episode, Lance and Andy meet the mysterious landowner whose land has never been detected (NB: this will be key to the plot for the coming episodes, people).  The landowner, played by David Stearn, bears a striking resemblance to Mick Aston – possibly not a coincidence, given that Crook was apparently inspired to write the series after watching an episode of Time Team. The humour running throughout is  dry, very British and is shows much of Crook’s self-depricating humour – he is a coin collector and a metal detectorist in real life.

All in all, a really enjoyable watch, and if the first episode is anything to go by, the series will be fantastic and I can’t wait to watch tonight’s episode!

The second episode of Detectorists will be shown at 10pm on Thursday 9th October on BBC Four. If you live in the UK and missed the first episode, you can catch it on BBC iPlayer. 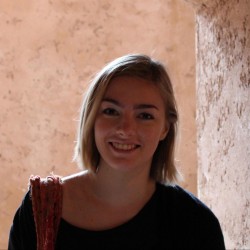