This morning I woke up naturally early again, thinking about how much troweling I would have to finish that day at the site. Luckily, we had more help today, so it went quickly and I got to practice recording the trench!

I also flipped through the Kings District  records pamphlet again before I had to leave to drive to our site.  The town of Cannan, aka the Kings District is only 7(ish) miles from the site so, the histories of these hamlets are really intertwined.

I got to the site and a whole group of new people were joining us today! But, the DV team sent three of us who had been there for at least a day to go down to the site and begin while the rest got orientated. First we had to clean the dirt layer. 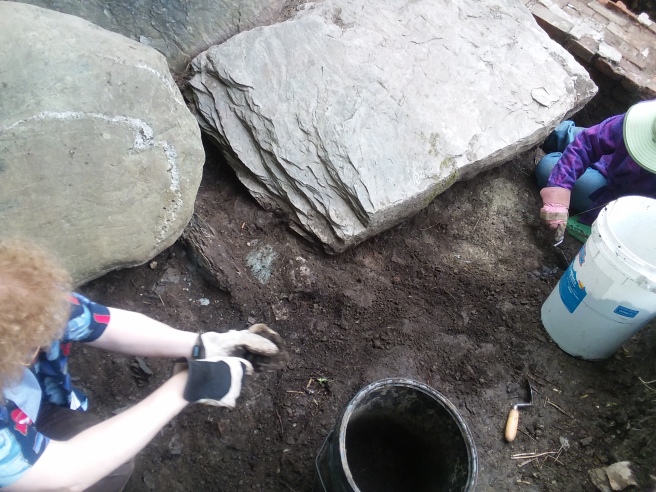 I was told to bring it down to ‘the gray layer’. Which you can see in the color of the dirt when your trowel scrapes the surface back. I felt as a whole we dug a bit deep into the layer, but we still managed to practice recording what was in our trench. I think over all we did a good job for 2 out of 3 beginners.

I was a bit excited to learn how to properly describe and record the trench since for several days I had my body hunched over it, exposing it for the first time in ages. Standing, sitting, & learning was a welcome break, even if it was mixed with knealing, bending and reaching.

We have discovered new yoga moves, like the downward facing trowel! (diagram to come later!)

Before we could record anything we also had to find how far above sea level we were. There is a stone with a geological survey marker which you use to measure from, and then you can measure where each feature is in relation to that.

How do you know from a stone, how far above sea level you are? I’m glad you asked! Today, we had the DV team leaders throw some fancy equipment at us with a funny name, just to make us sweat.

“Here put this together” they said with a laugh as they sat back and watched us fumble around. The dumpy they called it. Well, it didn’t take us too long to set it up. The tripod and gear is all basically a fancy level, which you can look through towards a pole marked with centimeters. Someone holds the pole level on the survey point, and you measure it. Then you can measure the same way through your trench and get the different heights.

I haven’t bragged too much about being a creative so, as eager as I was to draw… I was hoping no one else could really tell.

The women I was measuring and recording with had some tape measures and gave me measurements that I would then plot onto a graph paper, and then it’s like a connect the dots, mixed with art sketching mixed with archaeological code. For example, the “Y” marks on my sketches of rocks are there to show other archaeologists the angle of the stones.

We took photos of the site, and will use them with the sketches.

I was already happy with myself that I got to learn new things, like how to desribe soil in very specific ways, what archaeologists think a “modifier” means, and how I am both serious and comfortable doing all of this. There’s so much history in this area of the U.S.

At the end of the day, Lisa invited us over for some beers and food. I just couldn’t pass up a drink in this sort of company. We laughed, we talked, we cooked together. Bonding with people is good.

Bonding with a team is great but getting some bonding time with people who live too far away to see every day… or people who you’d love to pick their brain for a few hours – those are the best.

We were all tired. I didn’t want to leave them, just wanted to talk, and dig and just soak it all in. But I leave Monday and everyone else has another week here so I thought I’d let everyone rest and I left around 10pm. Today was really special. 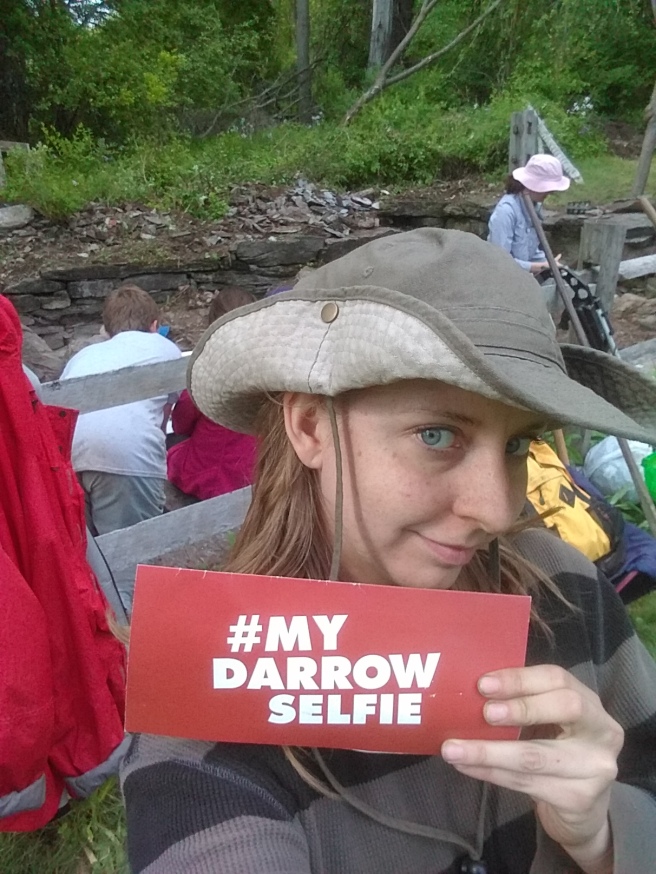 Speaking of sleep, I’m going to the site early tomorrow, so goodnight and see you tomorrow for my last Dig Day post!

You can read more of Amber’s Dig Diaries on her blog Chronicles of Anthro.

Latest from the Site Diary...

What We Found At Darrow’s Mount Lebanon Shaker Village

DigVentures’ first crowdfunded excavation in America has shown that if you want new material evidence on the Shakers, Darrow is the place to come and get it. Around the world, the Shakers are once…

We all know that archaeology isn’t just for adults, but what does doing it actually look like from a Junior point of view? On Friday, we handed our camera over to Anna. Here are…

It’s Day One at Mount Lebanon Shaker Village. Here’s what the team are looking forward to. The first day of any dig has a special kind of energy. It’s the first time you get…

Archaeology / In Your Hands